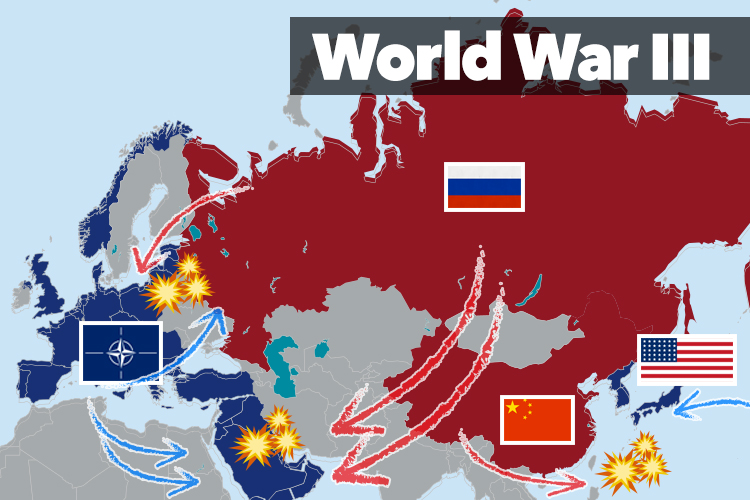 Several flashpoints could erupt into a global conflict involving the US, China, and Russia, it is claimed EXCLUSIVE

The world is closer to a catastrophic and bloody World War III than at any other point in the past 60 years, experts have warned. Russia and China, both of which are pumping vast amounts of money into their militaries, could soon rival the US in terms of power and prestige. Potential WWIII triggers are located in Poland, Syria and the South China Sea.

All three nations want to remain a global superpower – if not the only one – and are preparing for war, it is claimed. But they oppose each other on a swathe of issues across the globe, creating a delicate political balance that could collapse and engulf nuclear states and alliances such as NATO. A range of experts have identified several flashpoints across the globe which are today the most likely triggers for such a war…

The proximity of NATO and Russian bombers flying over Syria, Vladimir Putin’s aggression in eastern Europe, and China’s movements in the South China Sea are among them.

Experts have also raised concerns about the instability of nuclear-power Pakistan as extremist factions and terrorist groups within the country grow in power. Adding to this is these groups’ sworn opposition to neighbouring India – which holds its own much-coveted nuclear arsenal.

Britain’s Admiral Lord West told The Sun Online: “Basically none of us know what is going to happen but we are in a more dangerous, chaotic and unpredictable time than any other in my 50 years in the force. 14

“I believe that because of Brexit, I think Europe is very flaky, I think it is unfortunate that we didn’t stay in, because they actually need our military expertise.

“I can see bits of Europe breaking up and when Europe gets into a mess, twice in the past we’ve had to go in there and clear it up with immense loss of blood and lives.”

He warned that Britain was not sufficiently investing in its defense – and in particular, its Royal Navy.

The investment required to maintain its strength had not materialised in the years since the Falklands War, he said, leaving Britain in a precarious place.

RUSSIA AND THE BALTIC STATES

In July, a 25-page report by the US-based think tank Atlantic Council warned of Russia’s growing threat to NATO. NATO has been Europe’s primary military alliance since WWII – all 28 member states have sworn to respond as a group if a single member is attacked. The council’s report warned that Russia was an “existential threat to the Baltic states and Poland” and an annexation could be implemented “with great speed”.

It continued: “This might come at a time NATO and the EU are distracted by another crisis, or it might relate to some particular high profile event, the outcomes of which Moscow wants to shape.

“It might also result from a misperception of NATO’s activities and a miscalculation of the Alliance’s resolve.”

Admiral Lord West also said: “Russia under Putin is becoming quite aggressive, it’s spending a large amount of money on its military capabilities.

“Putin has said he believes in using tactical nuclear weapons if there is a war. That is highly dangerous.

“There’s little debate that he thinks of the Baltic states and possibly Poland as a Russian sphere of influence. They are NATO countries – I find that extremely dangerous.”

“I think people like Putin understand robust responses, they understand military power. I think he thinks he’ll pick (the Baltic states) off one-by-one.”

Another point of simmering tensions is Syria, where US and Russia are both carrying out airstrikes in support of opposing groups. While they share a common foe in ISIS, the US has backed Kurdish and moderate Syrian rebel groups against President Bashar al-Assad. Russia, on the other hand, is backing al-Assad against the rebels. With both countries carrying out air raids across the relatively small area, the chances of accidental clashes and misperceptions is high.

Peter W. Singer, a leading expert on future war, wrote in The Daily Telegraph last year: “As in the past, it is perfectly possible that a third world war could start with a small event, or even by accident.

“One of the many Russian bomber planes now probing NATO’s borders could collide with an RAF Typhoon, prompting an aerial skirmish the likes of which the world has not seen for decades. A Russian fighter jet was shot down by Turkey last year in a frightening example of how small incidents can quickly escalate

“Indeed, the skies over Syria are starting to get dangerously crowded, with Russian jets flying near US planes on bombing runs, and sparring with NATO air defences in neighbouring Turkey.”

Such an incident – albeit on a much smaller scale – was seen in November when Turkey downed a Russian jet it claimed it had encroached on its airspace during raids in Syria. The incident led to a collapse in diplomatic relations between the two countries and sparked weeks of mudslinging between Ankara and Moscow.

With neither side prepared to lose face, their military posturing only came back from the brink after a Russian soldier was photographed travelling through the Bosphorus Strait brandishing a rocket launcher.

In the past few years China has moved aggressively to dominate the South China Sea with the construction of artificial islands containing fighter jet bunkers. The move has alarmed countries such as Vietnam, Malaysia and the Philippines who dispute its territorial claims in the region. Futhermore, it has aggravated Japan and South Korea – two key members of a Pacific bloc the US has sworn to protect.

China has aggressively built artificial islands, such as this one pictured, where it will base fleets of jet planes

Peter W. Singer is also among those to suggest World War III could be triggered when “a Japanese or American ship scrapes paint with its Chinese Navy counterpart amid the reefs in the Pacific that are being militarized as part of Asia’s current arms race”. Indeed, Chinese military commanders – who are pushing ahead with new submarine deployments into the US’s Pacific sphere – believe this to be a genuine and legitimate scenario.

After a close call last year, China’s naval commander Admiral Wu Shengli warned his US counterpart: “If the United States continues with these kinds of dangerous, provocative acts, there could well be a seriously pressing situation between frontline forces from both sides on the sea and in the air, or even a minor incident that sparks war.”

THE COLLAPSE OF NUCLEAR PAKISTAN

Experts have long feared the collapse of nuclear-armed Pakistan – a country rife with instability, terror groups and with a sworn hatred of neighbour India. The concern is that its nuclear arsenal could fall into the hands of non-state groups ready to use it against the West, or other proxy groups. It is feared nuclear-armed Pakistan is too unstable to keep its atomic bombs secure from extremists. Notably, Pakistan was the birthplace of the Taliban – a fundamentalist Islamic group that spread into Afghanistan and ran the country following its war with the Soviet Union.

A British Ministry of Defence report released in January earmarked the region as one that will continue to generate threats to the UK. It also warned that “inter-state conflict and internal instability” were possible.

A March report by Harvard Kennedy School stated the “risk of nuclear theft in Pakistan appears to be high”.

The authors wrote: “The trend seems to be toward increasing risk, as Pakistan’s nuclear arsenal expands and shifts toward tactical nuclear weapons, while adversary capabilities remain extremely high.

“Over the longer term, the possibilities of state collapse or extremist takeover cannot be entirely ruled out.”

George Friedman, the founder of geopolitical forecaster STRATFOR, has warned: “Be ready for war.” Mr Friedman has written extensively about emerging trends and international affairs. He recently told Business Insider that interstate war – such as that seen during World War I and II, is a recurring characteristic of politics.“There has never been a century that has not had a systemic war — a systemic war, meaning when the entire system convulses. “Do you want to bet this will be the only century that doesn’t have one? I’ll take that bet.”
“When you have the countries like Germany, China, and Russia decline, and be replaced by others, that’s when systemic wars start.
“That’s when it gets dangerous, because they haven’t yet reached a balance. So Germany united in 1871 and all hell broke loose.”
“Japan rose in the early 20th century, and then you had chaos. So we’re looking at a systemic shift. Be ready for war.”

Heavenly Father, continue to be the God over all of the nations of the Earth. Let every policy that will not favor Zion be changed in the name of Jesus Christ. November 2nd, 2016admin